There are two leading players in the world of 360 cameras: GoPro and Insta360. Both companies offer a variety of models to choose from, each with its own set of features and price points.

So, which one is the best? This article compares the two leading 360 cameras, the Insta360 One X2 vs GoPro Max.

GoPro is a company that makes action cameras.

GoPro is a well-known action camera brand, and its products are among the most prominent in the world. In 2002, the company began operations.

What year did the GoPro Max come out?

Is it worthwhile to invest in a GoPro Max camera?

GoPro Max is, in my opinion, one of the most useful 360 cameras available since 2019. 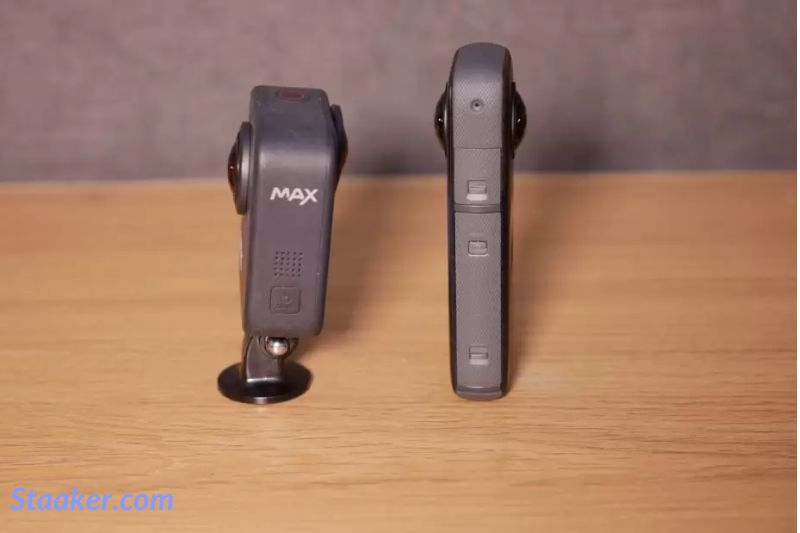 The Insta360 One X2 is a camera that allows you to take 360-degree photos.

A few things to know about the Insta360 One X2, similar to the GoPro Max: the same questions are asked again.

Who is Insta360, and what does it stand for?

Another fantastic and well-known action camera brand is Insta360. Dealing with them necessitates bringing out the best in them.

Is it worthwhile to purchase the Insta360 One X2?

The One X2 camera is worth purchasing because of its many excellent features. According to Insta360, this camera unlocks possibilities, and we agree!

GoPro’s second-generation 360 camera, the GoPro Max, was released in late 2019. Because of its excellent video quality, simple editing interface, and attractive appearance, the Max became the best 360 camera. Like the other GoPro products, the Max has a luxury feel.

The One X2 is a newer camera released in November 2020 as the successor to the highly successful One X. The One X2 has been revamped to be more robust and easier to use, along with better color and processing power.

The primary purpose of both cameras is to be used as action cameras. 360 cameras are ideal for action photography because they allow you to generate unique views while keeping outstanding stabilization. These cameras can also be used to vlog or make virtual reality videos. Let’s see which of these two best 360 cameras wins.

The One X2 and Max are pretty comparable in raw specifications. The 5.7K 360 video resolution is the same for both cameras. These videos become 1080p flat videos when they are reframed. 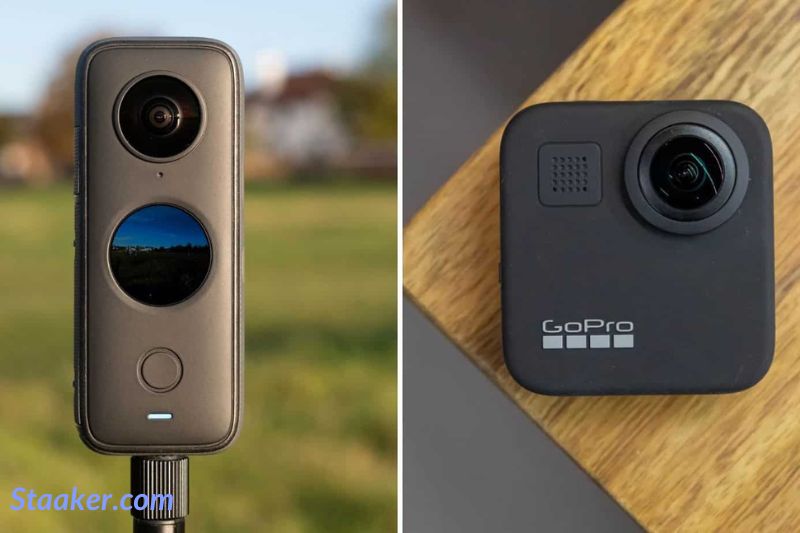 Just because the video specs on both cameras are the same does not guarantee the video will look the same. Even though the Insta360 One X2 has a higher data rate, the GoPro Max appears to have superior color technology. I’m guessing GoPro’s Max lens technology is outstanding as well. The video on the One X2 is nice. However, it gets a little loud in low light.

The One X2 also has a video HDR option that significantly increases the dynamic range of your footage, but it only works when the camera is stationary.

Although there isn’t much difference between the two, I like the GoPro Max video’s overall color and quality. The One X2, on the other hand, provides more shooting choices, including LOG mode, which enables better post-production editing.

Modes for a Single Lens

Both cameras offer a single-lens shooting mode to film regular non-360 video. Both cameras’ single-lens modes are limited to 1440p at 30 and 60 frames per second in single lens mode. It’s as if you’re filming with a regular non-360 action camera when you use this mode. While the resolution is low, the benefit is that you get spectacular stabilization without doing any extra work.

The distinction between the two is, once again, minimal. The critical difference is the color processing, which might result in various color tones; this is a personal choice. The One X2 is louder than the Max and appears to record significantly darker footage.

The One X2 takes the cake when it comes to 360-degree photography. The X2’s Pureshot mode improves the quality of your images by combining numerous exposures without the need for post-production. The One X2 also can take HDR and RAW shots.

On the other hand, the GoPro Max has minimal photography capabilities. You can’t shoot RAW pictures or use HDR mode. Although neither camera’s photo quality is professional, the One X2 is unquestionably the superior of the two.

The incredible stabilization technology that keeps even the most severe action images looking smooth sets both of these cameras apart. Hyper smooth 2.0 is the name of GoPro’s stabilization software, while Flowstate is the name of Insta360’s. Aside from the name, there isn’t much of a difference between the two, and they both perform well to steady any motion shot.

It’s impossible to say which has superior software stabilization. If you’re searching for an action camera, you’ll need to consider all of the other characteristics before making your choice.

The story is very different when it comes to photography. HDR, Pureshot, and RAW are several photo modes available on the One X2. The maximum photo resolution is 18.4 megapixels, and manual adjustments are fully accessible.

Both the GoPro Max and the Insta360 One X2 are action cameras, and they, like other action cameras, include a tough build and some protection. The One X2 has two lenses projecting from the top in a candy bar shape. The camera’s spherical touch screen in the center offers complete control of all settings and video previews.

The One X2 features a robust plastic body and complete waterproofing up to 10 meters. Rubber textures are also available for improved grip. The One X2 has an excellent feel, and the waterproofing locking mechanisms appear sturdy. 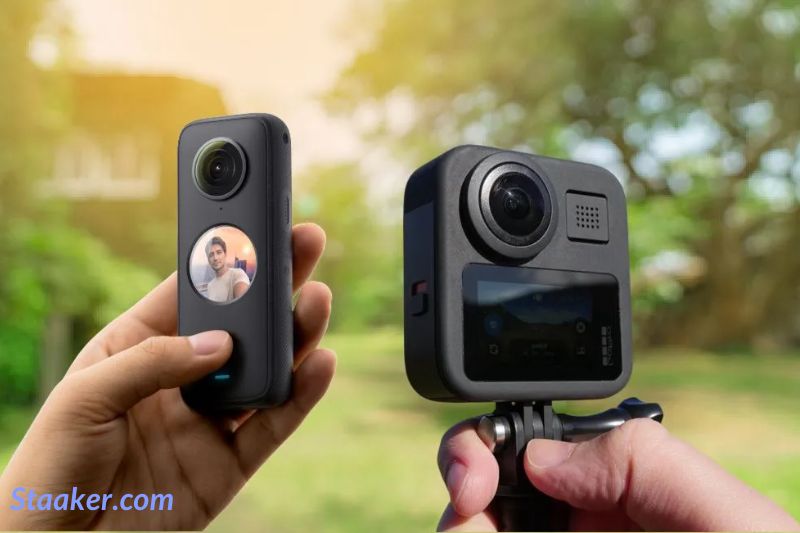 The Max is a square camera with two lenses on each side and a giant touch screen. The Max has a larger screen, which makes it easier to operate. In addition, the Max is a camera that may be used in various settings.

Without a case, the water resistance is equal to the One X2 at 10 meters. A thick rubber coating and rigid plastic make up most of the Max. Lens shields are included in the cameras.

The One X2 has a standard 1/4-inch mount, whereas the Max has a GoPro-designed mount that can be used with various accessories. Both cameras appear to be well-made and unlikely to break. The lenses are at risk in both situations. Lens protectors are included with the Max, but you must purchase them separately with the One X2.

Both cameras may be used underwater up to 10 meters because of their design.

These cameras have a lot of similarities, so choosing between them may be challenging. The software developed by the cameras, such as desktop editors and apps, is where the cameras divide.

Because these films have significant editing possibilities, editing software is a crucial consideration for any 360 camera. GoPro and Insta360 have attempted to offer simple apps that allow you to make distinctive and high-quality videos. Each platform has its benefits and drawbacks, so be aware of them!

The Insta360 mobile app is jam-packed with tools to make one-of-a-kind videos. An AI editor can automatically recognize and edit the most significant sections of your photographs. The Shot Lab effects allow you to create unique 360 video effects that no other program can.

The best part of the Insta360 mobile editor is that you don’t have to transfer files to your phone to edit them. To begin editing, connect to the camera. This significantly speeds up and streamlines the editing process.

The Insta360 App has a color editor, filters, speed adjuster, object tracker, and these automatic editing features. The tracker is excellent at tracking a single person throughout your film, making it ideal for action shots like skiing and skateboarding where you want to focus on one individual.

While the Insta360 App is simple to use, packed with features, and unique, it does have some flaws. To access all of the app’s features, you’ll need a relatively powerful phone, and even then, it may freeze or crash.

On the other hand, the GoPro editor is less feature-rich but more stable. You can also use the GoPro app’s automatic editor to make vlog-style videos with music, headlines, and transitions. You may quickly reframe your 360 movies and change their color/appearance. However, the program lacks advanced functionality, such as an object tracker.

The most problematic aspect of the GoPro software is that you must transfer all of your files to your phone before you can edit them. Before using the automatic vlog maker, you must reframe every 360 files separately, which is a lengthy task.

Overall, the Insta360 app is more popular since it can make a broader range of films, including special effects and dramatic footage. New features are added regularly, and there is a lot of help. The GoPro app is still a fantastic editor, but it’s a lot more essential and takes longer to use.

The GoPro Max vs the Insta360 One X2: Which is Better? 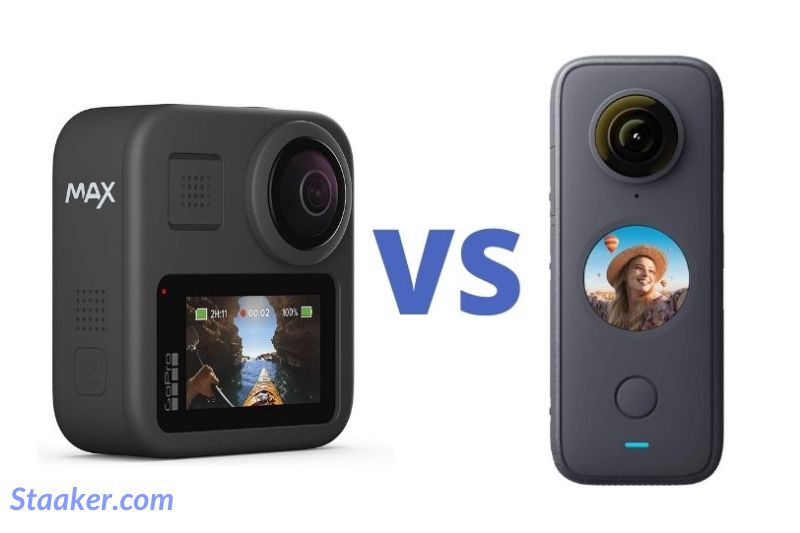 These two cameras are undeniably similar. Both cameras are essentially 360-degree action cameras with the added capability of shooting conventional video with one lens, making them two cameras. The GoPro Max produces somewhat higher-quality video and likely has more advanced lens technology, but the Insta360 offers more excellent software and photographic features.

In either scenario, your experience with both cameras will be very similar; the One X2 is the far superior camera for photography, but it is also slightly less reliable.

Maybe you consider buying another camera, refer to some articles below:

Ultimately, the choice of a 360 camera comes down to personal preference. However, if you are looking for a top-of-the-line model, the Insta360 One X2 is the clear winner. It offers better image quality, ease of use, and more features than the GoPro.

Hope you found this article helpful! Let Staaker.com know in the comments which 360 camera you think is the best.