The DJI Mini SE is a new drone on the market similar in many ways to the Mini 2. However, some critical differences between the two may make one a better choice for you than the other.

This article will compare the DJI Mini SE vs Mini 2 in terms of features, specs, and price to help you decide which is the best drone for you.

The pricing difference between the DJI Mini 2 and the DJI Mini SE is significant. While the DJI Mini 2 costs $699 for the Fly More Combo, the Mini SE costs only $479. The Mini SE was designed to be a more economical option for those looking to purchase a mini drone as their first drone.

While the DJI Mini 2 is the more expensive of the two, it has a little more powerful camera and a more extended range, making it well worth the extra cash for those willing to pay it.

The DJI Mini 2 and the Mini SE are ultra-lightweight at 249 grams, falling under Transport Canada’s 250-gram weight limit. This is excellent news for anyone searching for a simple DJI drone to start with because you won’t need to register or obtain a license to fly it. It’s also fantastic news for anyone who doesn’t want to carry a large drone when hiking into the mountains to capture some fantastic images.

The Mini 2 and the Mini SE feature a foldable and lightest design that makes it easy to transport the drone to and from the shooting place.

When folded, the two DJI drones measure 138x81x58 mm (LxWxH), and when unfolded, they measure 159x203x56 mm (LxWxH). Both of these DJI drones are easy to fold and transport in a tiny bag or backpack while traveling far and wide to catch the best sights.

Without the correct stabilization system, even the best camera in the world would not record good footage. Fortunately, the DJI Mavic Mini 2 and the DJI Mini SE share the same 3-axis motorized gimbal, ensuring smooth, consistent video in various shooting circumstances.

This means that you can rely on both drones to keep your film from becoming choppy and destroying the scene, even if you’re shooting in a windy environment or up in the mountains.

RESOLUTION OF IMAGES AND VIDEOS

Another critical difference between the Mini 2 and the Mini SE is the camera. The Mini SE, like the original Mavic Mini, can shoot high-quality video at up to 2.7K resolution at 30 frames per second (60 when the resolution is adjusted to 1080p), which is impressive for a drone of that size. It can also take jpeg photographs with a resolution of 12 megapixels.

The Mini SE features a fixed focus lens to concentrate on both close and far distant things, and the video is captured at a bitrate of 40 Mbps. Its camera also supports interval shooting, with intervals ranging from 2 seconds to 60 seconds. 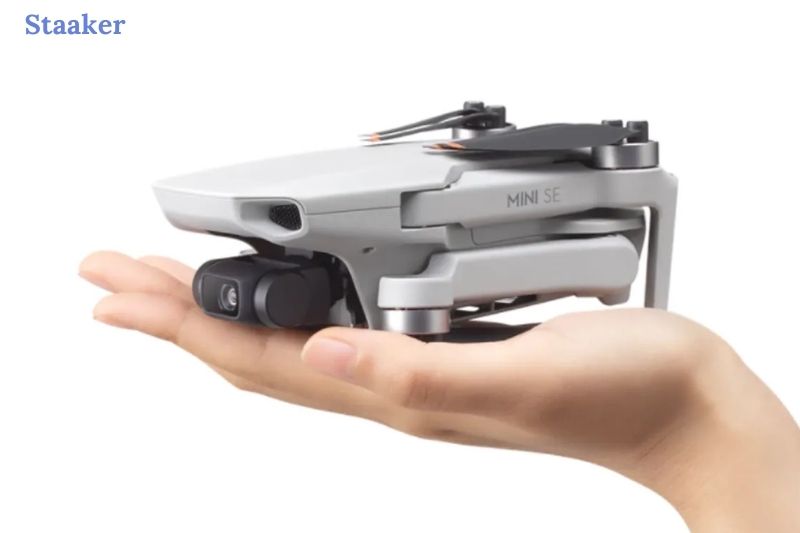 The Mini 2, on the other hand, has a camera capable of shooting 4K Ultra HD video at up to 30 frames per second. It also takes 12-megapixel images, just like the Mini SE, but in both JPG and DNG RAW formats. This allows you to take professional-looking photos and transfer them, store them effortlessly, and modify your data in various forms.

When shooting in 1080p, the DJI Mini 2 camera offers 4x digital zoom, allowing you to capture close-up details from a safe distance. By altering the distance and arrangement of your photos, the digital zoom may help you create unique transitions between them. Digital zoom is not available on the Mini SE.

Another area where the DJI Mavic Mini 2 and the DJI Mini SE differ substantially is flight range. While the Mini SE can send HD video up to 4 kilometers, the Mini 2 can send it up to 10 kilometers.

This is long enough to match the more extended consumer DJI drones, allowing you to fly the drone and record all of the footage you require without physically moving. OcuSync 2.0, DJI’s breakthrough video transmission mechanism, is responsible for the Mini 2’s ability to transmit at such a great distance.

The usage of the 2.4/5.8GHz Dual Frequency technology is something that both drones have in common. This method automatically changes the transmission between the two frequencies, cutting through interference and ensuring a stable signal.

You won’t have to worry about interference or signal fading threatening the safety of your drone or the quality of your flight as long as you stay within the proper range.

When used in sport mode, the DJI Mavic Mini 2 and the Mini SE have a minor difference in maximum flight speed.

This is the same as the original Mavic Mini’s maximum flight speed, so the Mini 2 is the way to go if you want something a little faster. 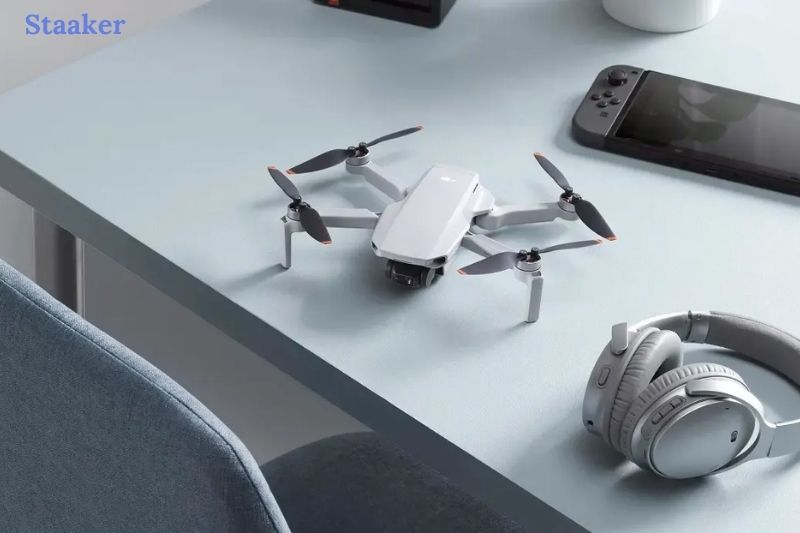 The Mini SE, on the other hand, more than holds its own in terms of wind resistance, matching the Mini 2’s ability to withstand Level 5 gusts of up to 37.8 km/h. Both DJI drones can endure the weather, whether you’re flying on a windy beach or high in the hills or mountains.

The DJI Mini SE boasts a more powerful power system than the Mavic Mini, letting you fly for up to 30 minutes on a single charge under optimal conditions. The DJI Mini 2 goes a little further, with a flight length of 31 minutes.

This isn’t much longer, but it’s enough to get you the final bit of footage you need without stopping and charging. Both DJI drones are terrific options for planning, composing, and shooting the perfect photo while flying longer and farther than ever before.

The DJI Mavic Mini 2 and DJI Mini SE both have several smart features that improve flight safety and assist new pilots in getting used to flying a drone. Both DJI drones have a valuable safety function called Smart Return to Home (RTH), which allows you to recall the drone to its starting place. Press the RTH button on the remote or use the DJI Fly app to start the drone’s return flight.

Both drones have intelligent characteristics, including automatic takeoff and precision hovering. You can use automated takeoff to have the drone launch itself into the air, saving you the trouble of doing it manually every time.

Precision hovering allows you to keep the drone hovering at a specific height. This means you can concentrate just on capturing the shot you require rather than piloting the drone.

You can cut the film with the immediate editing feature, picking only what you want to edit and download while discarding the rest. This helps to save space and speed up the editing process.

While the Mini SE lacks these two functions, both drones allow you to edit and apply templates to your photographs and movies using the DJI Fly app’s editor suite. You can choose from several intriguing layouts, sounds, and effects in the program, picking and choosing what you prefer to achieve the look you want. 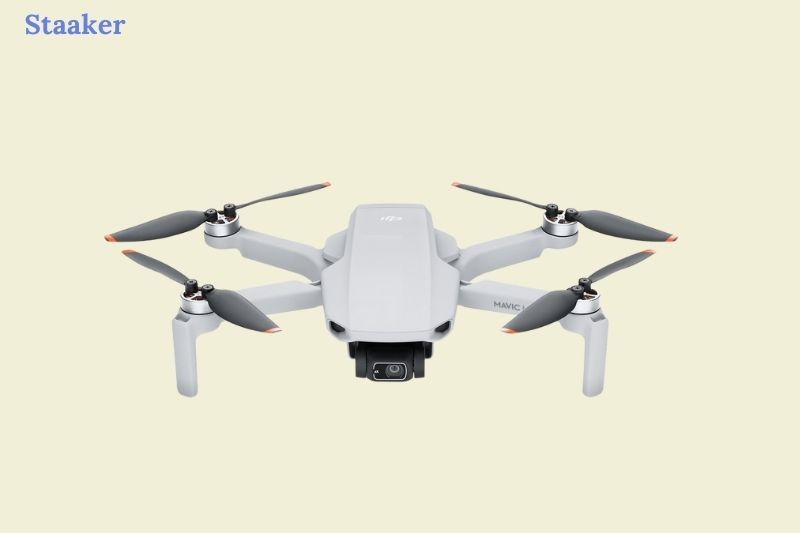 Fans of DJI’s micro-drones will be pleased to learn that both the DJI Mavic Mini 2 and the DJI Mini SE include cinematic QuickShot modes that allow you to accomplish complex aerial maneuvers with a single button press. These can help you shoot spectacular films with eye-catching effects that you can quickly share on social media.

Use a drone to take a selfie! While filming a drone, this feature forces the drone to hover close to you before flying back and up.

The drone starts near you before flying back and rises higher while flying around helix motion around you.

The drone’s camera is pointed straight down as it flies up into the sky in Rocket mode, gently exposing the scene around you.

Boomerang mode starts with the drone hovering near you before flying backward and then returning to you, creating a boomerang-like journey that looks great on film. The Mini SE does not yet support Boomerang, but DJI is known to add functionality via software updates.

The DJI Mini SE differs from the DJI Mini 2 in one crucial way: it comes with a significantly smaller remote controller. This remote includes detachable sticks and a foldable mobile device holder, making it easy to transport. With its Lightning RC connector and Micro-USB and USB-C RC cables, it can connect to most Apple iOS and Android devices.

The Mini SE and Mini 2’s remote controls allow you to see what your drone sees while in flight, filming precisely what you want and when you want it.

Both drones have tail-gate opening doors for their batteries; however, the Mini SE, like the Mini 2, uses LiPo (lithium polymer) cells. This provides more power when needed than the Mavic Mini’s original Li-ion battery, hence the two batteries are not interchangeable. The batteries on all Mini models lack the convenient one-press charge meter we’ve expected from DJI’s Intelligent Flight Batteries.

Instead, they must be charged by attaching a USB-C socket to a compatible charger. Given the importance of speed and weight in drone design, it’s not surprising that we haven’t seen wireless charging here.

Those who invest a little more in the Fly More kit will receive an external Charging Hub to charge three batteries in succession and use them as a power brick.

Is there obstacle avoidance on the DJI Mini SE? 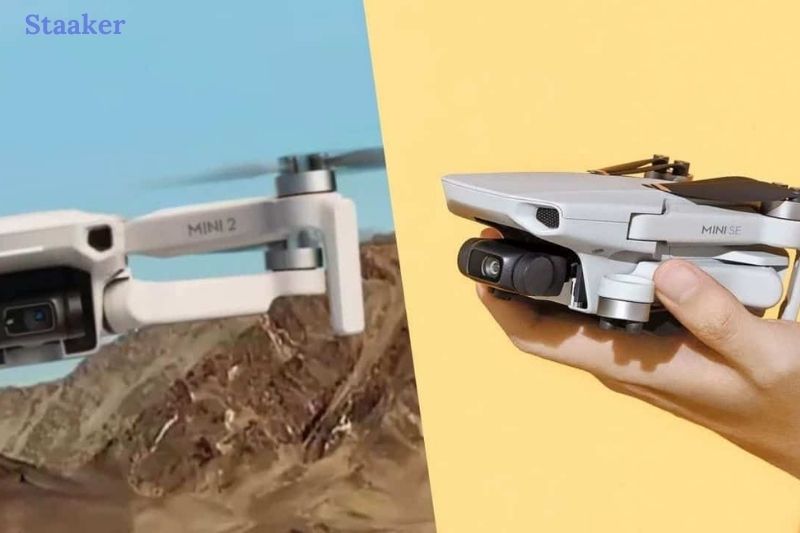 Is the DJI Mini 2 water-resistant?

Because the DJI Mini 2 is not waterproof, you cannot fly it in the rain. Rainwater can sneak inside the drone through a few open ports and vents and shortcircuit its electronics.

Can you fly the DJI Mini 2 without an Internet connection?

Ultimately, the DJI Mini SE is a good drone for those looking for a cheap option that still offers some features and functionality that more expensive drones do.

The Mini 2 is a better choice for a more advanced drone with more features and options, but it may be more expensive. Thank you for reading our article. Staaker.com hopes that you found it helpful.