A drone is a flying robot that a remote can control. Drones are becoming increasingly popular, as they can be used for various purposes, including taking pictures and videos, delivering packages, and even providing emergency aid.

But how much weight can a drone carry? In this article, Staaker.com will troubleshoot this question for you.

How Much Weight Can A Drone Carry? Factors That Influence Payload 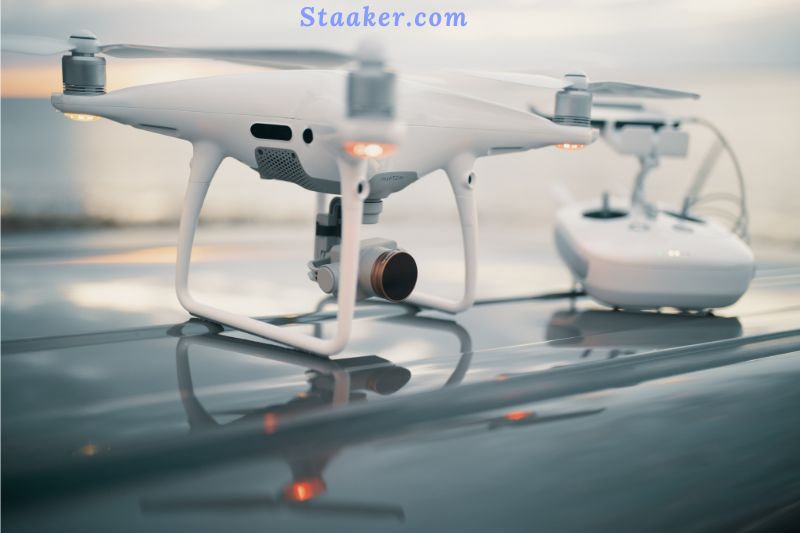 There are typically four categories of drones: toy, micro, hobby, and professional. Those new to drones typically prefer a toy drone so that if they crash it, it won’t cost them much to replace it (toy drones cost an average of $30).

If they continue flying their drones, these UAV pilots will eventually upgrade to hobby drones. For many drone pilots, this is the drone of choice. However, individuals whose occupations involve drones may have a professional-grade drone.

This is because the carrying capacity of a drone varies depending on its classification. Toy drones are not designed to carry much weight, so if the UAV can carry even half a pound, consider yourself lucky.

Regarding professional drones, the payload can reach up to 25 pounds or even 500 pounds, or 227 kilograms. Theoretically, these drones could lift a person!

What factors affect the payload of a drone besides its type? Now, let’s discuss these factors. 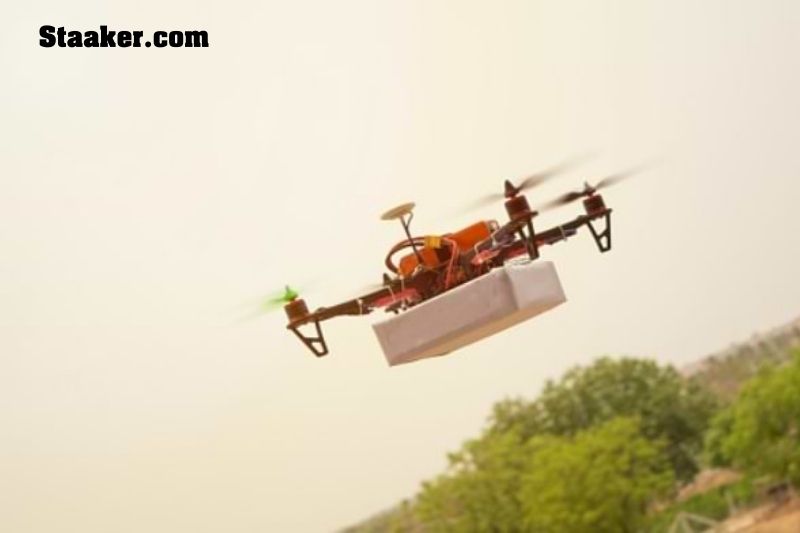 A toy drone cannot carry much weight because it is inexpensive and because these drones are typically relatively small. Miniature drones will also have modest payloads for the same reason: they are not particularly large.

Due to their often substantial bulk, professional drones can carry the most significant mass. These drones are meant for mine surveying, search and rescue, and other challenging tasks. Therefore they must be constructed with durability in mind.

The payload of a drone comprises everything it carries, including batteries. If your drone has many batteries or a huge battery pack, less weight is available for carrying extras.

Regarding your drone’s carrying capacity, the propellers also have a role. Propellers can provide lift, but they will be heavier if they are too large. Like everything else, the drone must support the propellers’ weight, which limits its payload. 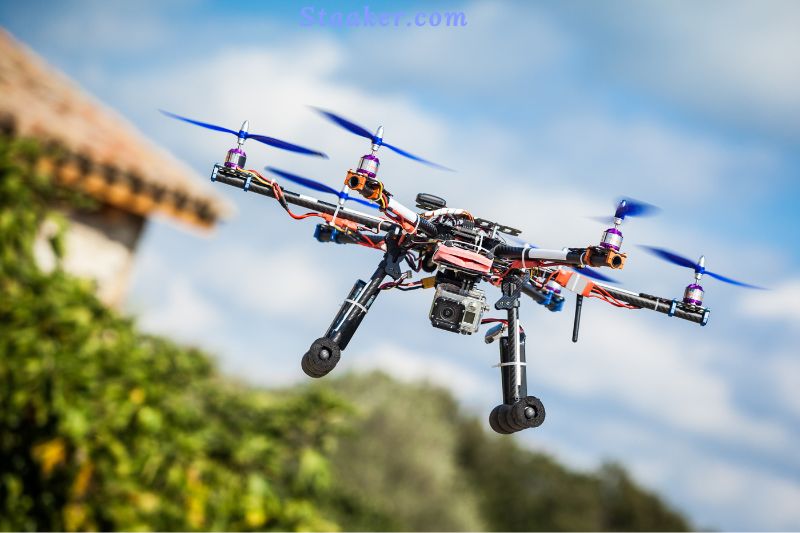 The number of propellers can have the same effect on the drone since the more propellers. However, the heavier they are, the more motors and propellers result in a more excellent lift.

A drone with a motor that has been enhanced can carry its full payload without faltering. If you attach a smartphone case to your drone’s motors, the motors will begin to fail.

11 samples of actual drone payloads from micro-drones, hobby drones, and professional drones are provided to illustrate how much a drone can carry. Among the brands covered are DJI, Yuneec, and others. 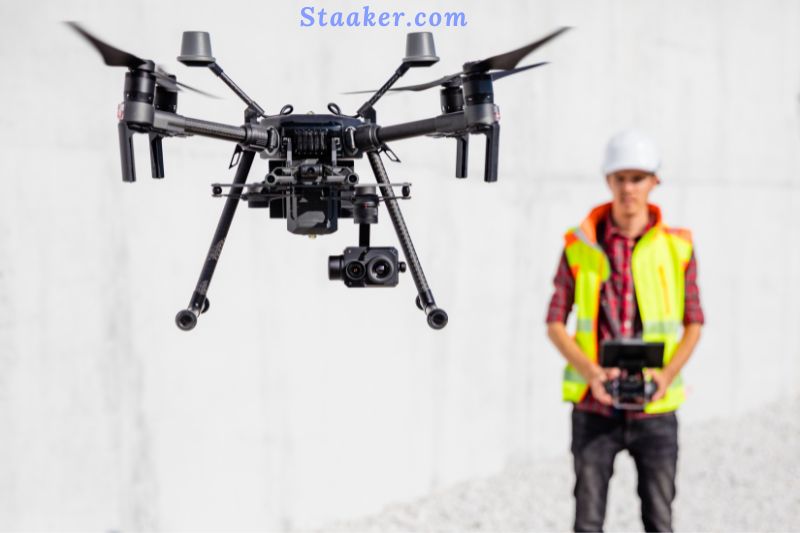 Which Drones Have The Largest Payload Capacity? 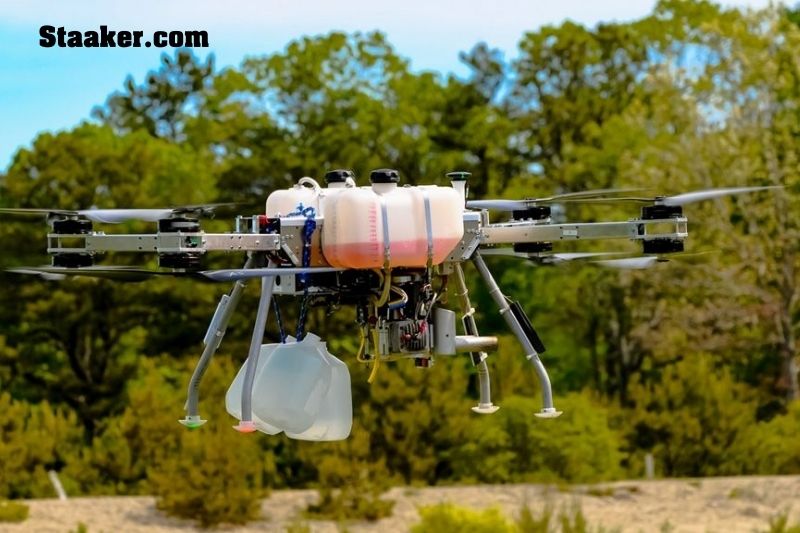 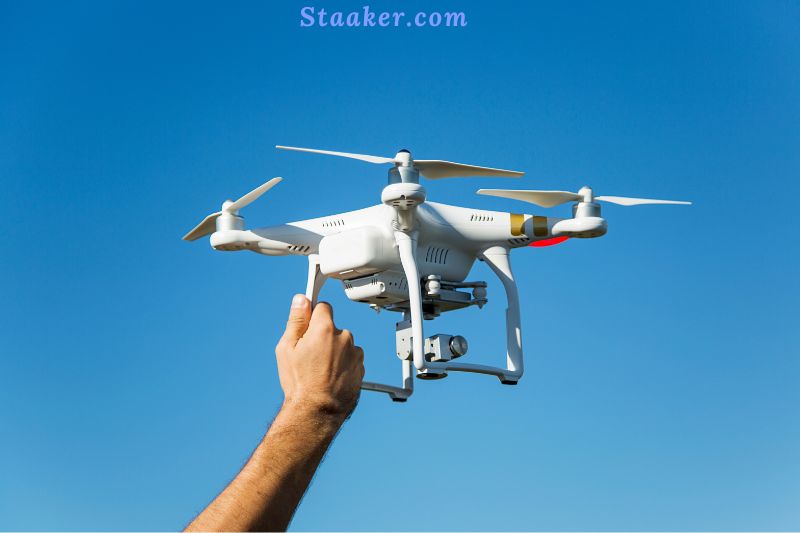 No, it was not a typo when we stated that this drone could carry 500 pounds; the Griff 300 is capable of carrying that much weight. It is one of the few drones capable of performing the task.

Griff Aviation is a Norwegian company that manufactures a range of drones, but the Griff 300 is arguably the most amazing of all. With a payload of around 496 pounds, the Griff 300 has ample capacity to transport a passenger.

The Griff 300 has eight propellers to maintain flight for up to 45 minutes. Considering that the Griff 300 is a somewhat large drone, this is quite impressive. This is a photograph of it.

The Griff 300, powered by electricity and batteries, is neither a recreational nor a professional drone. It has only been utilized for search and rescue missions thus far.

The Ehang 184 is a one-of-a-kind drone in that it is an autonomous passenger drone capable of speeds over 60 miles per hour. Since 2015, the Ehang 184, which is manufactured by a Chinese company named Ehang, has completed 40 UAV-assisted passenger flights.

The Ehang 184 measures roughly 12 feet, eight inches in length. It is four feet and nine inches tall, and its wingspan is eighteen feet and one inch. The single-passenger drone has eight fixed-pitch, dual-bladed propellers. 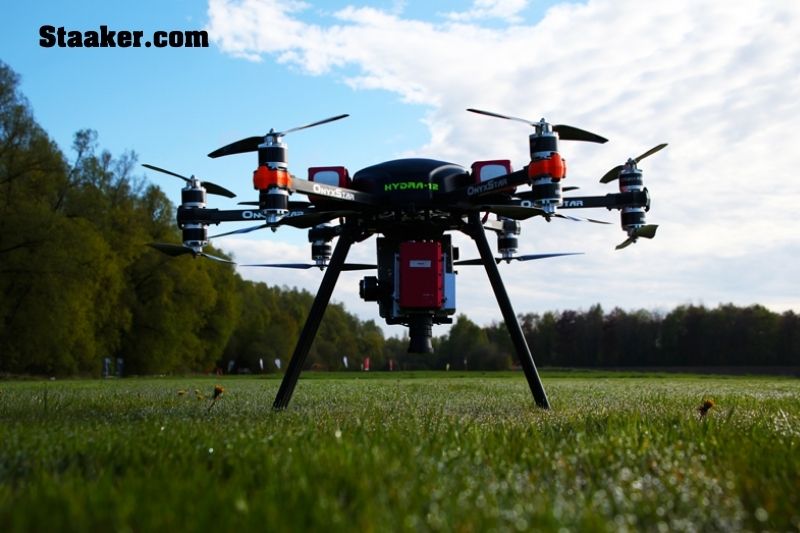 Although it cannot carry hundreds of pounds, the OnyxStar HYDRA-12 (link) has an impressive payload of 26.5 pounds.

The drone is equipped with sensors for detecting obstacles and avoiding them. With RTK or Real-Time Kinetic precision, the HYDRA-12 boasts detection precision that surpasses that of GPS.

Its carbon body is resistant to damage, and with autonomous takeoffs and landings, this drone flies as smoothly as butter. Waypoint navigation, flight control settings, and geofencing are additional capabilities.

Let’s explore the type of drones to choose the most suitable for your need.

Why Is Payload Capacity Important For Drones?

At this point, you may be asking how significant payload is in the larger scheme of things. Is it truly a determining factor for drones?

The fact is, drones by themselves are essentially just toys. It is the heavy-lift models that bring actual utility to the table.

The cargo capacity of a drone impacts its adaptability. A larger lifting capacity enables you to attach more technology to the drone, which immediately multiplies its processing power and versatility. 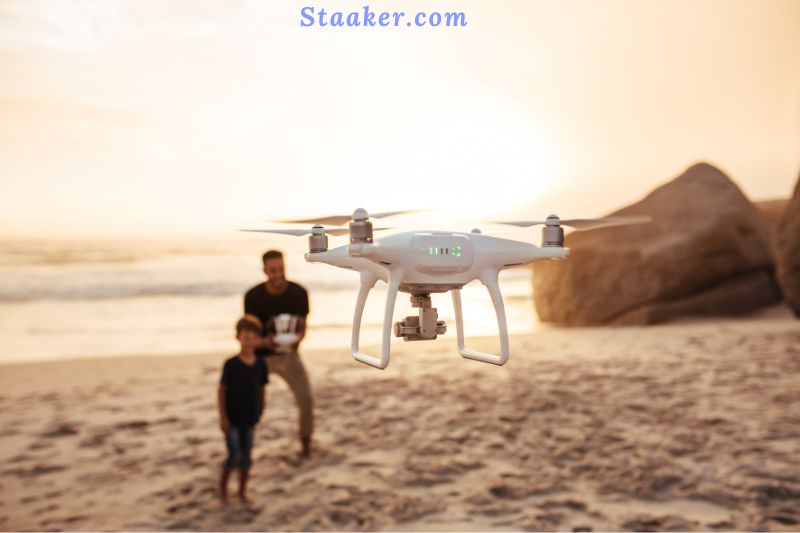 These enhancements may include LiDAR technology for digital mapping or high-end cameras for cinematography – the choices are limitless.

Also, this is not everything. Some larger drones are employed solely for transportation. Their ability to carry large goods will transform contemporary industries.

If you want to find a way to stop drones from flying over your house this guide is for you.

What Happens If The Maximum Weight Limit For A Drone Is Exceeded? 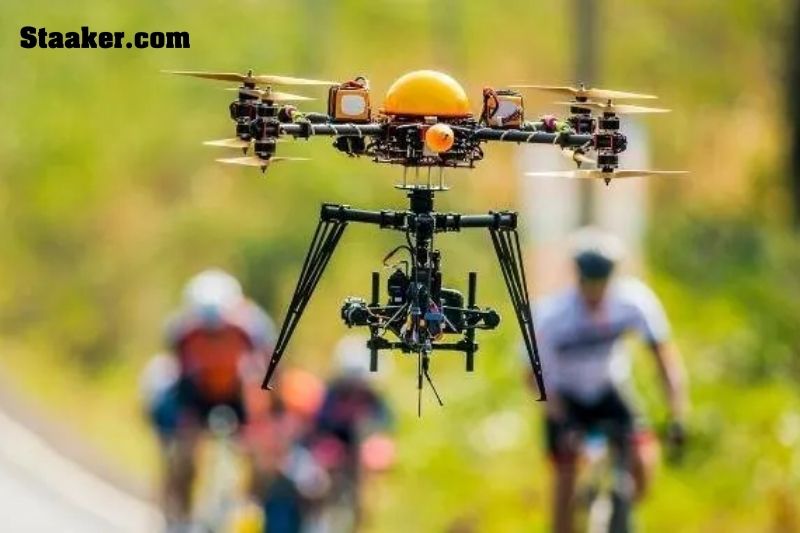 Suppose you discover the information in this guide a bit too late. You were ecstatic about all the attachments your drone could utilize, from propeller protectors to a carrying bag for your smartphone so that you can capture the action in real-time.

How will you know if you have gained too much weight? Your drone will inform you. Here are several indicators to watch for.

If your drone’s payload capacity is deficient (less than a few pounds), there’s a significant risk it won’t even take off if you add too much weight. The drone cannot support its weight in addition to the importance of the added attachments.

You may sometimes be fortunate, mainly if your drone is fresh and in otherwise good condition. Despite being overloaded, a drone with a respectable payload might be able to climb into the air. However, the drone will not fly very swiftly, and you may hear whirring and screech from its components.

Your drone is in the air, but it’s performing poorly. Even if you are attempting to maintain a straight flight path, your drone zigs and zags like there’s no tomorrow. If you attempt a customized flight path, the drone will still not fly as instructed.

Also, the sound you heard upon takeoff is now significantly louder.

At this point, your drone is having trouble remaining airborne. It can only fly in sporadic bursts since that is all it can maintain.

The whirring or screeching sounds, likely coming from your drone’s engine, are intensifying since your drone is exerting itself more and more. It is only a question of time before it reaches its limit. 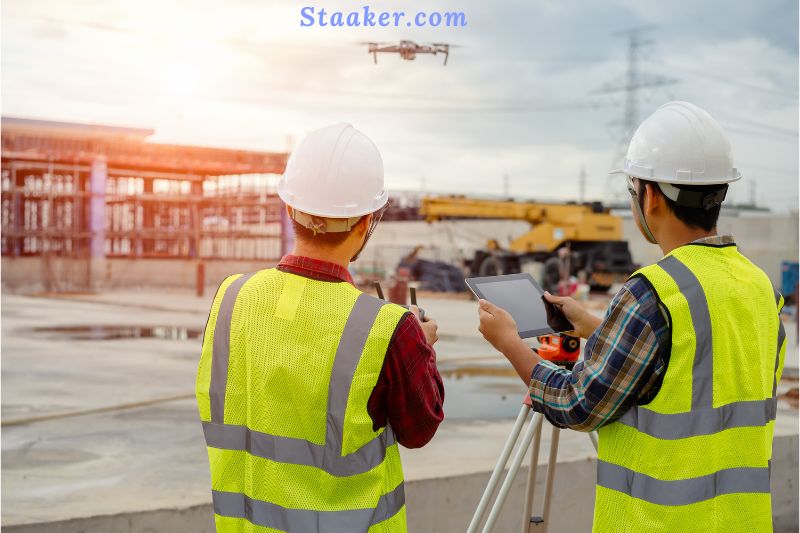 And it appears that moment has arrived, as your drone is currently descending. Possibly the drone will land safely, but it will more likely crash. Hopefully, you weren’t flying the drone too high when this occurred.

Even though your remote still functions properly, you cannot operate the drone. The motor exerted itself with such force that it may be broken, rendering your drone unable to fly.

You approach your drone and place your touch on it. It is extremely hot to the touch. As the overworked motor generated a great deal of heat, this is what you’re experiencing.

If you flew your drone for a short time, the engine may not have been ruined. After your drone has sufficiently cooled down, you can take it home, charge it, and give it time. It might be resurrected.

However, if your drone is pushed to the point of crashing, the motor and the drone may be destroyed.

How To Minimize The Weight Of Your Drone – 5 Tips 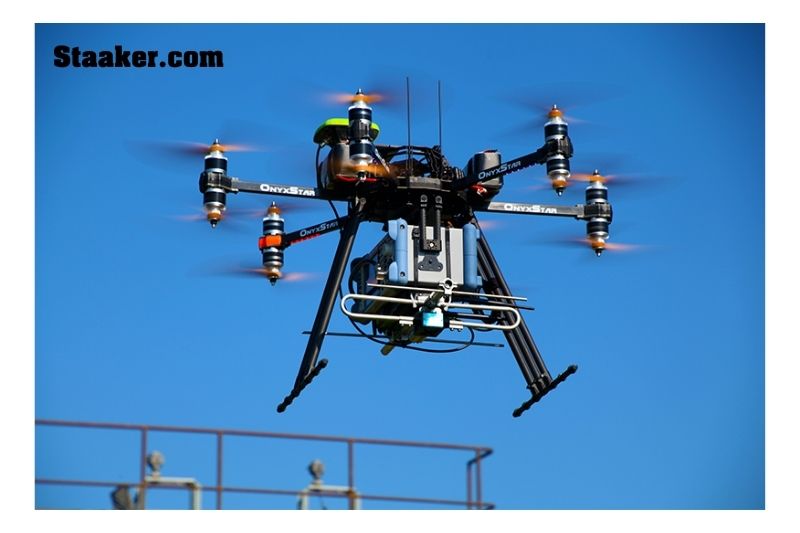 It is preferable to operate a drone without exceeding its payload limit. The following five recommendations can help you travel with your drone more efficiently.

1. Bring only the essential equipment.

If your drone has a sophisticated camera, is it necessary to attach your smartphone to the UAV? No. The camera on your phone is not nearly as good as your drone’s, so what’s the point? You are simply adding mass to the drone.

For each accessory you rely on, consider whether it is essential. It is acceptable to carry one or two accessories, but not many.

The next four suggestions entail changing your drone; if the UAV is still under warranty, you should proceed cautiously. Tampering with your drone will void the contract without question. 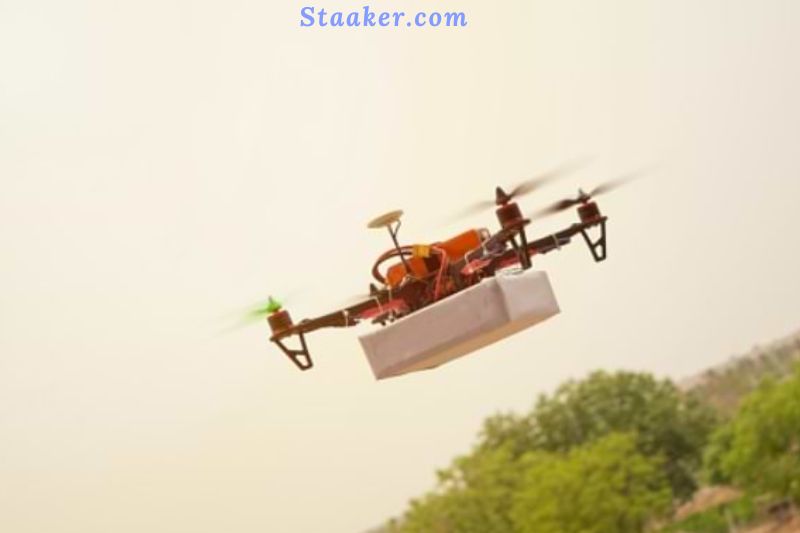 With that disclaimer out of the way, if you still wish to proceed, one option is to change the frame of your drone. The frame is the metal or plastic housing that protects the interior components. Typically, it is also cumbersome.

If you can find a lighter frame that will suit your drone, replacing the old frame with the lighter one may be worthwhile. 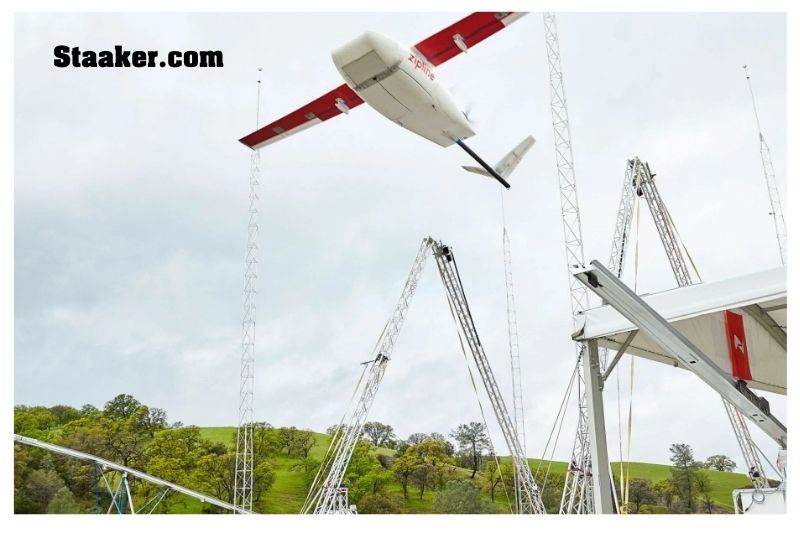 Since you now understand the frame of your drone somewhat better after replacing it yourself, you may also feel comfortable replacing the frame supports. Supports can be stacked in 2020 or 3030 configurations. You can reduce your drone’s weight by several grams by reducing its size.

Long-term, it is not significant, but it can make a difference.

Verify that the drone’s frame is still appropriately supported by a more petite frame stack. You do not want a subpar configuration only to reduce the weight of your drone.

Changing the motor is the true Frankensteining of your drone. Before purchasing a new engine for your UAV, you should weigh the current one. Then, investigate various motors. If you discover a several grams lighter motor, you may proceed to install it. Engines that are merely marginally lighter are not worth the effort. 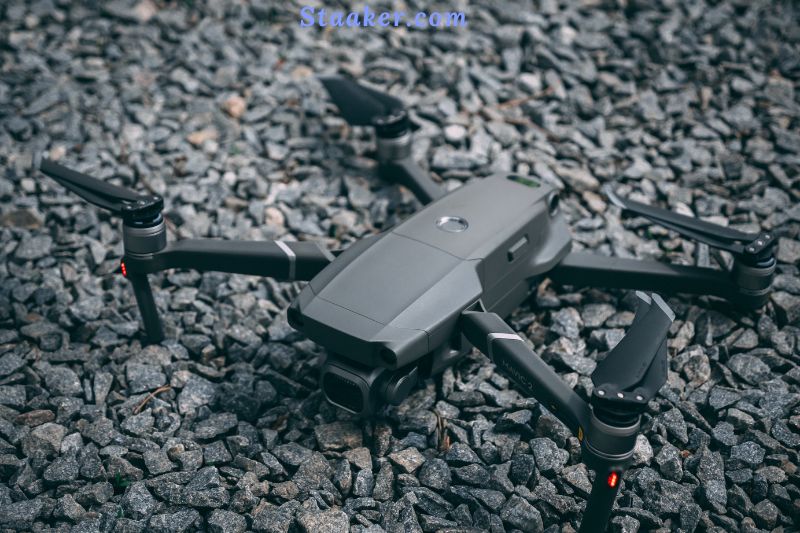 Propeller guards are helpful for novice pilots, but ultimately they are unnecessary weight. Once you feel comfortable controlling your drone, remove the prop guards. Your drone will be a few grams lighter automatically.

If you are still unhappy with the weight of your drone, you may always remove the propellers and replace them with lighter ones. Please verify that the propellers are compatible with your drone before purchasing them.

Drones come in various sizes and shapes, and their lifting capacity depends on several factors, including the drone type, the drone’s size, and the number of rotors.

Generally speaking, the larger the drone, the more weight it can carry. However, some drones are specifically designed to carry heavy loads, which can lift much more than the average drone.