Many different types of drones are available on the market, but one of the most popular is the hover drone. Hover drones are unique because they can stay in the air longer than other drones. This makes them ideal for taking photos and videos.

If you’re thinking about purchasing a hover drone, it’s essential to do your research and read this Hover drone review before making a decision. This will help you find the best drone for your needs and budget. 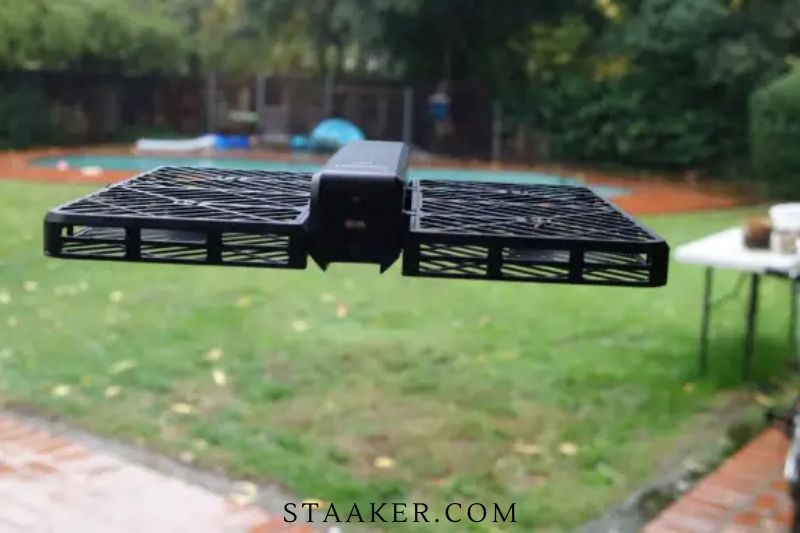 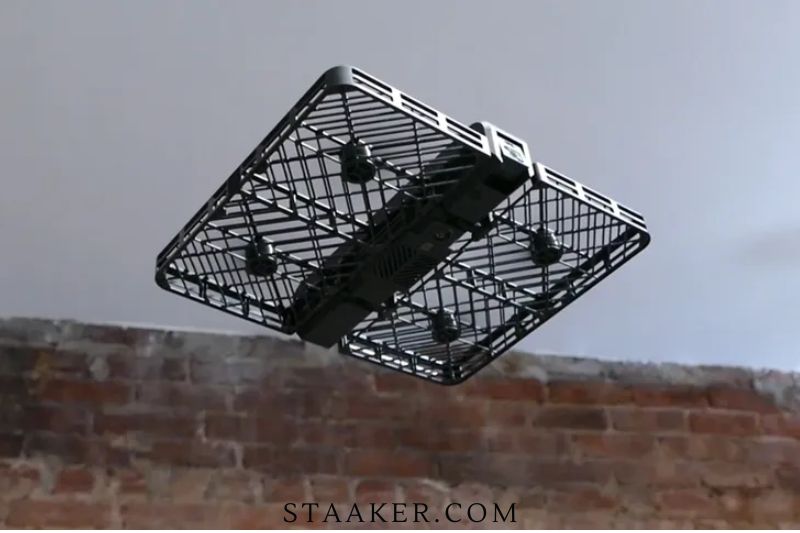 Although drone technology has advanced significantly in recent years, a new era is now beginning. Manufacturers are designing them with features and specifications that target a certain sort of use, like racing, FPV, or filmmaking, rather than filling them with every feature known to man.

A shining illustration of this trend is the ZeroZero Robotics Hover Camera Passport. This drone is designed solely for capturing selfies and follow film rather than being a jack-of-all-trades, so we took it out for a few weeks of selfie-taking to see how it compares to some of the more fully featured drones on the market. 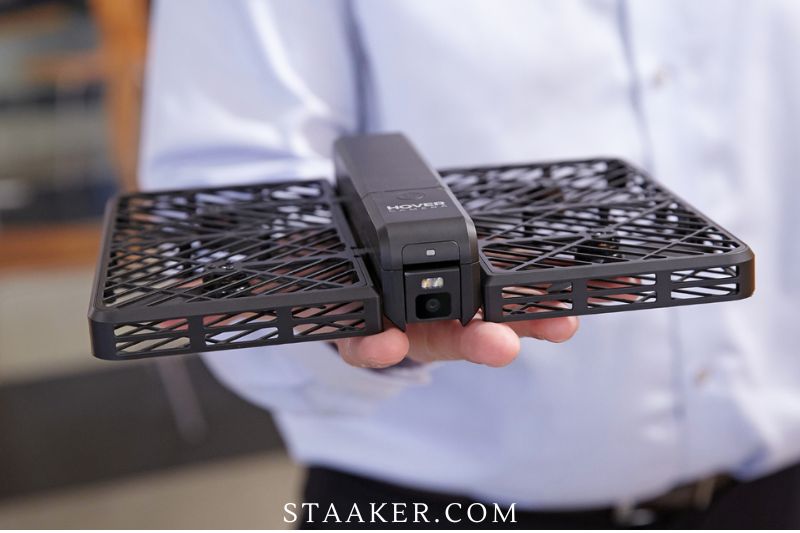 The Passport’s foldable form is undoubtedly its most important feature. For now, let’s just say that this is one of the most portable drones we’ve ever experienced, and that’s no accident. We’ll get into the specifics in a bit. It is purposefully designed to fit into a backpack or purse so that you always have it on hand.

Additionally, the drone has a decently small camera. Believe it or not, the camera itself isn’t as remarkable as what’s behind it. It can capture stills and video in 13 megapixels and 4K, respectively.

Thanks to image recognition software and a quad-core Snapdragon processor, the Passport distinguishes itself from other portable drones by being able to recognize and track faces and bodies as well as retain its position in space without the use of a GPS signal.

The Passport also includes a variety of autonomous flying and filming modes to complete the set. Along with basic features like Orbit and Follow, it also boasts a 360-degree panorama button and a setting called Beast Mode that enables you to disable the drone’s software-imposed motor restrictions for situations when you need to follow extremely fast-moving things. 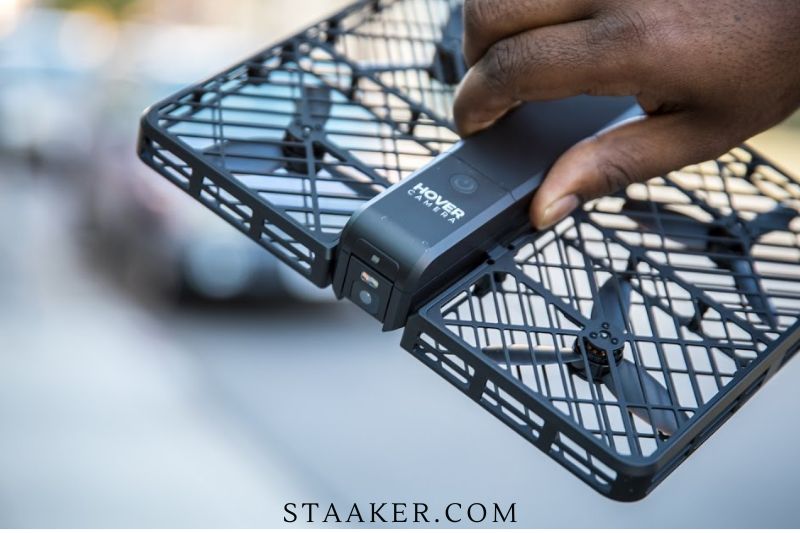 One of the most inventive drone ideas we’ve ever seen is the Hover Camera Passport. When you’re not flying, it’s designed to fold up like a book, as you would have guessed from the name. The entire machine’s electronics are housed in a thin “spine,” and beneath the spine are two enclosed propellers that swing out like pages.

The drone has nearly the same proportions as a VHS cassette and is only 1.3 inches (33 millimeters) tall when fully closed. Additionally, because it weighs under 0.53 pounds (242 grams) with the battery attached, US citizens won’t need to register it with the FAA in advance of flying, which is convenient.

The Passport’s carbon fiber prop cages, which provide it with many significant advantages, are another feature we truly enjoy. They primarily serve to prevent the propellers from colliding with objects, greatly lowering the possibility of a crash. We slammed this drone into walls like it was our job, but the cages always kept the rotors turning, and the drone typically managed to hover again.

The prop guards also shield the pilot from the rotating blades, which is more crucial because it makes it safe to launch the drone from your hand or even grab it out of the air once you’re finished flying.

This kind of safety is a game-changer since it makes the drone more approachable and enticing to use, despite the fact that it may appear like a little insignificant function.

We felt free and empowered to fly the Hover Passport camera in areas that we’d otherwise avoid because we didn’t have to worry about maybe hurting onlookers, property, or the drone itself. The independence and security that prop cages offer can undoubtedly be praised. 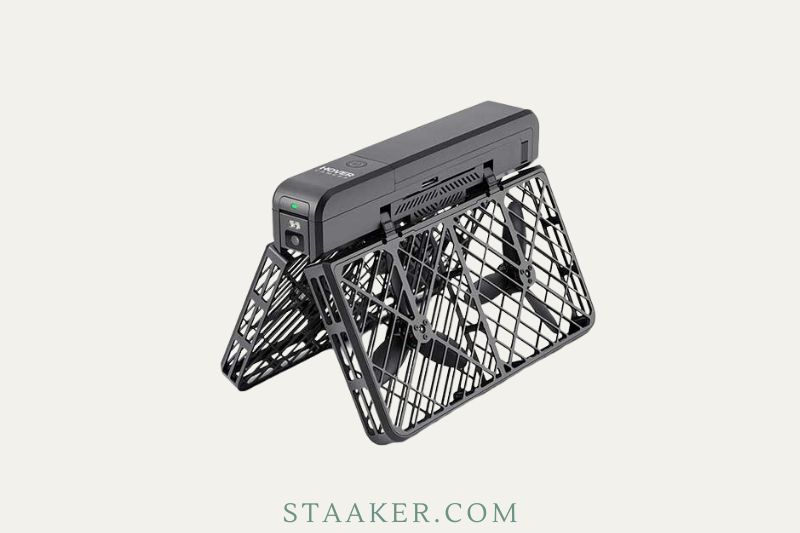 Although it’s easy to use and a lot of fun, the Passport isn’t the drone to buy if you want a high-performance flight. It’s not nearly as sporty or nimble as other of the higher-end drones we’ve tested because it can only go 17 mph (in manual mode), lacks GPS, and has a maximum advised a range of 65 feet.

But that is on purpose. This drone’s specifications and capabilities reflect the fact that it was created primarily to serve as a flying camera robot. It is made to stay near to you and follow you wherever you go, as opposed to having a very large range. It is concentrated on flying itself, so you don’t have to, as opposed to having extremely sensitive manual controls.

The need to be concerned about where the camera is pointing is even lessened by the facial/body tracking software. The entire machine is designed for autonomous flight, so it would be advisable to look elsewhere if you want to demonstrate your piloting prowess.

Even though it’s not actually designed to be flown manually, the Passport has companion software that offers a variety of controller layout possibilities.

If you are comfortable with traditional controls, you can fly with two virtual joysticks; all you need to do is position the camera, utilize the streamlined layout, or even activate tilt mode to control the drone by simply tilting your phone in any direction.

The Passport’s manual modes can feel a little loose and imprecise, as with most smartphone-based controls, but we still value the opportunity to change the control layout.

The two modes that utilize the Passport’s image recognition technology, Face Track and Body Track are the most remarkable and self-explanatory. To use them, you simply tap on the face or body that you want to keep in focus, and the Passport will take the necessary action.

One of the nicest aspects of the Passport, the software isn’t quite as feature-rich or user-friendly as DJI’s Active Track technology (which can track any object you choose). Nevertheless, it works very well. 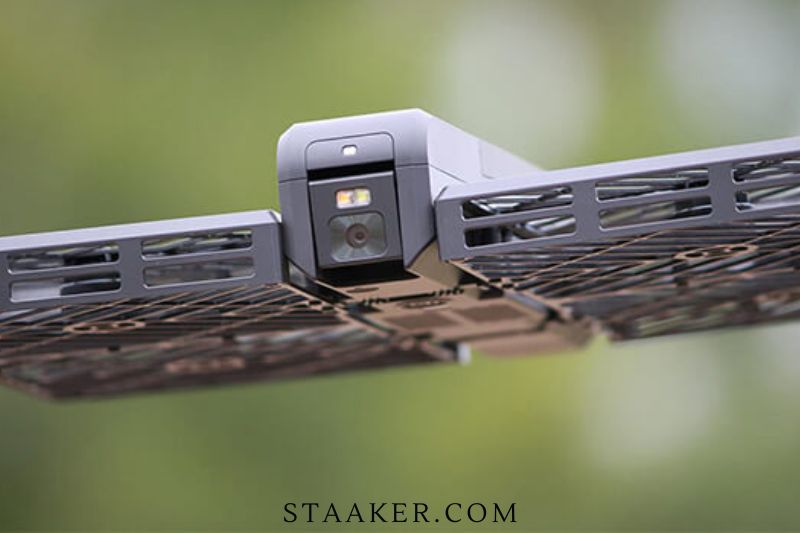 We discovered that the Passport could stay in the air for roughly 9 minutes and 32 seconds in a pure hover test (where the drone is operating nothing but the bare minimum to maintain a steady hover). If you fly it a little harder, you can anticipate a decrease of one to two complete minutes.

Even while the drone’s battery life decreased in our most demanding tests, it never fell below 8 minutes, even when it was fighting a breeze or pursuing you with all of its might in Beast Mode.

Our average flight duration was 9 minutes and 14 seconds after well over a dozen trips. The Passport ships with two lithium-ion batteries, so if you take off with both cells completely charged, you may anticipate a total flight length of roughly 17 to 19 minutes, less than the 10-minute flight time specified on the package.

The average time it took for our completely discharged Passport batteries to fully recharge was around 47 minutes. 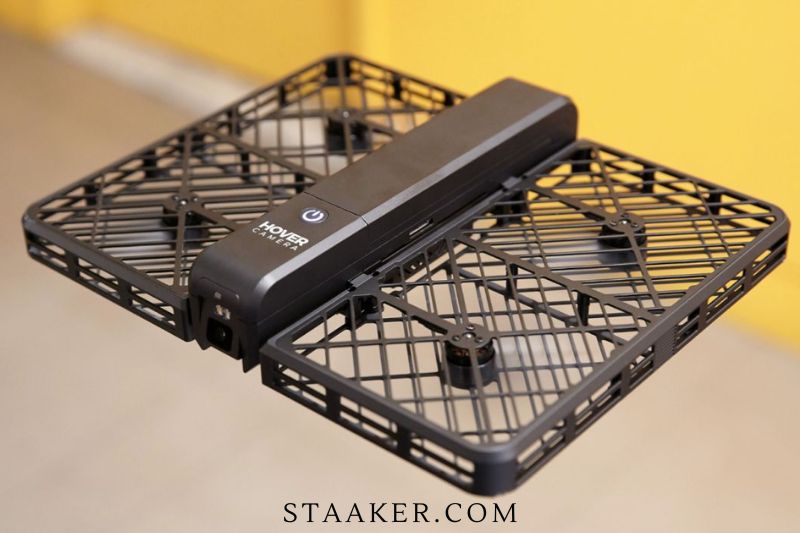 Despite the Passport’s claims of being a selfie camera, the camera itself is undoubtedly quite subpar in comparison to what is offered on some other drones. Regardless of the resolution, it can only shoot at a maximum frame rate of 30 frames per second in 4K, 1080p, or 720p.

Additionally, lacking a gimbal, it stabilizes images using a single-axis swivel and digital stabilization. This effectively means that if you want smooth video, a film in 1080p, as 4K video is only stabilized along one axis and is likely to be shaky.

Nevertheless, the camera’s inadequacies and defects are largely compensated for by a few ingenious features that increase the camera’s usefulness. The Passport includes a built-in flash in addition to the aforementioned face and body tracking software that locks onto your subject, making it the perfect camera for taking selfies and group pictures.

There aren’t many upgrades and great drone accessories available right now. While new modes and capabilities are likely to be added in the future, firmware updates are released quite frequently. At the time of writing, however, hardware upgrades and additions are sparse.

In all honesty, the Passport wasn’t made to compete head-to-head with the more feature-rich drones now on the market. The Passport is completely awesome at doing those things; it’s built to take selfies and record videos.

Is There A Better Alternative? 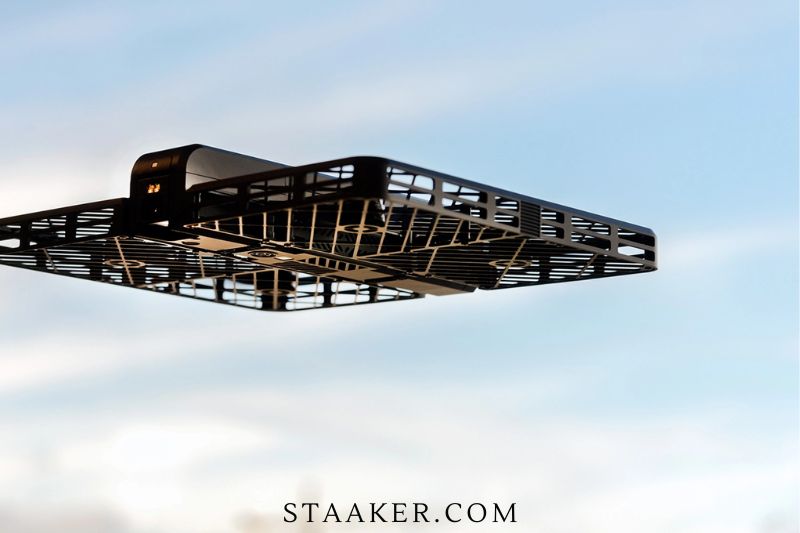 The Passport’s main rival is likely the Yuneec Breeze. It is $100 less expensive and has somewhat superior specifications in terms of range, battery life, and image quality. On the downside, it is less portable, doesn’t have a flash, and is unable to recognize images.

For these reasons, we’d suggest the Passport is the best pick if you only intend to take selfies; however, the Breeze is a better choice if you also want to take landscape photos or practice your flying.

If you don’t mind spending a little bit more money, there are, however, far better drones available. A DJI Spark, which is perhaps the greatest selfie drone on the market right now, is available for $500. It boasts a better camera, greater flight skills, and obstacle avoidance when facing ahead. We believe it is absolutely worth the additional $150.

Another drone with a higher price tag is DJI’s new Mavic Air, which is comparably portable to the Passport but has a lot more capabilities and functionality. If you have the money to spend $800 on a drone, you should read our full review since it is one of the best we’ve ever flown.

How Much Time Will It Take?

You’ll most likely have this drone for several years. You will struggle to lose or kill this drone because of its small range and carbon-fiber prop cages. In other words, the Passport will probably continue to fly for years to come, barring any odd mishaps.

Do You Want To Buy It?

Yes, but only if purchasing a drone is only for the purpose of making films of you and your buddies. For those who are interested in flying or who want to improve their piloting abilities, the Passport is not a wise choice. If a selfie drone is what you’re looking for, look no further. It is a selfie drone through and through. The best selfie drone ever created is this one. 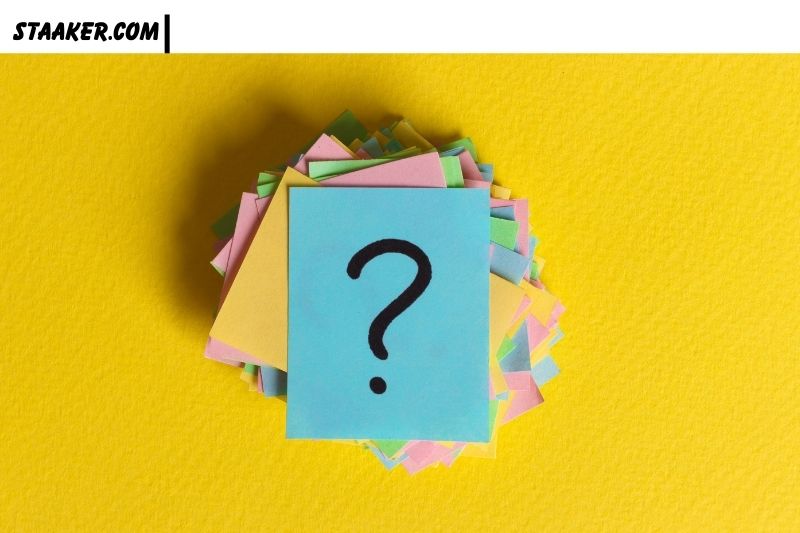 How long do hover drones stay in the air?

The average hover drone can stay in the air for about 10-15 minutes. However, this will vary depending on the specific model and brand of drone.

Hover drones are generally safe as long as they are used in accordance with the manufacturer’s instructions. However, as with any flying object, there is always a risk of injury or property damage if the drone is not used properly.

How far can hover drones fly?

Hover drones can fly up to 30 meters.

The Hover drone is a flying vehicle that a remote can control. It is powered by batteries and has four propellers. The drone can be used for photography, videography, and other purposes. The main advantage of the hover drone is that it can be used in places where traditional drones cannot fly, such as indoors or in tight spaces.

Additionally, the hover drone is much quieter than traditional drones, making it ideal for stealth operations. Hope this article was of some help.