If you’re new to photography or want to try something different, a disposable camera can be a great option. They’re easy to use and relatively inexpensive, making them a great way to experiment with film photography.

In this article, Staaker will show you how to use a disposable camera, from loading the film to taking care of your prints.

What Are the Different Types of Disposable Cameras?

Disposable cameras are, in general, similar. They work with film and include a winding button to get you to the frame. A flash that may be activated by pressing a button is common. You’ll be looking via a little viewfinder. You won’t find advanced features like a zoom lens in disposable cameras.

Turn the camera’s right-hand scrolling wheel until it clicks into place. This will advance the film to the next frame, allowing you to take a photograph. When you have the frameset, you must turn it to the right, and it will stop.

If you cannot take a picture, you have most certainly not turned the scroll far enough. It’s also known as a thumbwheel because it’s turned with the thumb.

Turn on the flash

If you intend to utilize a flash, be sure it is turned on before taking a picture. There is a button near the flash that will charge the flash when slid. While it charges, you will hear a sound. It takes two to five seconds, and it will be ready when you no longer hear the sound.

While there is little light or when trying to photograph anything from a distance, most people utilize the flash. The flash is optional; the camera will function without it. Because some cameras lack a flash, you can skip this step. 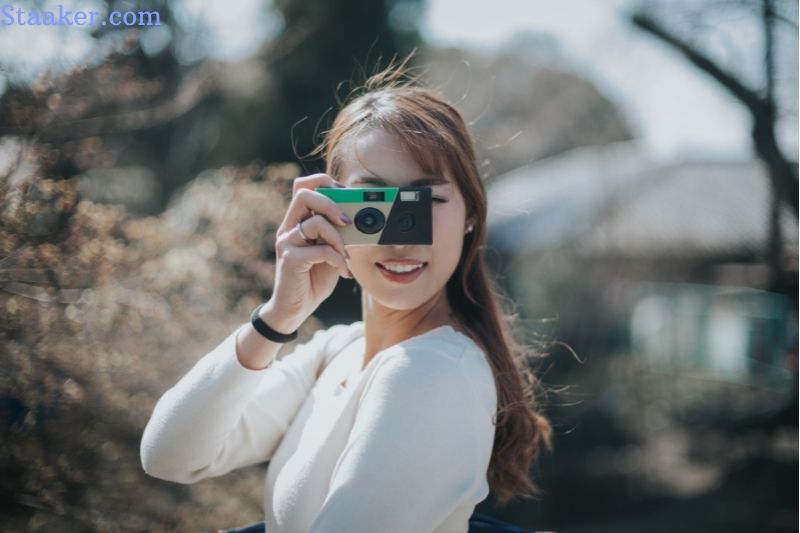 Place the camera in front of your face

When lining up your shot, keep an eye on the light source. You could be using natural light outside or artificial lighting indoors. You shouldn’t snap a photo precisely in front of the light, nor should you take one directly away from it.

Once you’ve lined up your shot, press down on the top of the camera’s button. Try not to move the camera while pressing the button. You can remove your finger from the button when it clicks since your photo has been taken.

Some waterproof cameras contain a lever instead of a button, which you must draw until the click is heard. Once it’s finished, you’ll need to rewind it to get ready for the next shot.

This procedure can be repeated until the disposable camera has been used up. A window with a small number indicates how many more images you can shoot is frequently included. You’re done with your throwaway camera when it runs out of shots.

Get your disposable camera developed

When you’ve taken all of your images, the only thing left to do is take them to be developed. You can take your film to any store that develops it. You can also locate sites online to send your camera and have the images returned to you. You can develop the photos at home if you have the necessary equipment.

What Is The Best Way To Use A Kodak Disposable Camera?

1. Insert the disposable camera’s film and batteries. Turn the scroll wheel with your thumb.

2. moving the film to an empty frame in the disposable camera

3. Turn on the flash if necessary. To activate the flash, look for the huge button near the lens on the front disposable camera and drag it down. 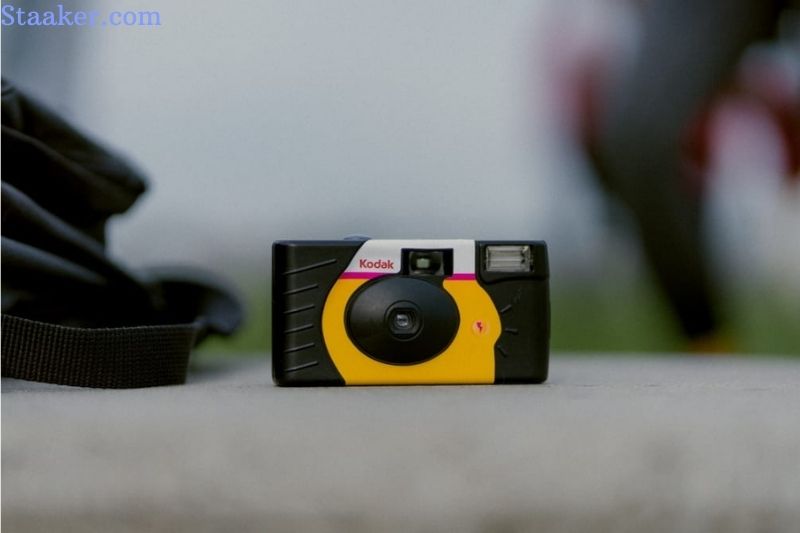 4. Look through the viewfinder and raise the camera to your eye to take an image. If required, change the angle of your camera to change the composition of your topic.

5. Press the button above your smartphone to take a picture. Keep the camera as steady as possible while remaining silent. If you hear a click, the shutters have finished opening and closing. It indicates that you have taken your photograph.

6. Take pictures with your camera till the movie is over. If you want to know how many videos or photographs you have left, look at the top of your device next to the capture button! The remaining films or pictures are printed on a transparent plastic sheet.

7. Have your film developed at any photography studio.

What Is The Best Way To Use A Fujifilm Disposable Camera?

1. Move the movie in the camera by turning the scroll wheel to the right.

2. Slide the front button on the camera to activate the flash.

3. Look through the viewfinder by raising the camera to your eye. 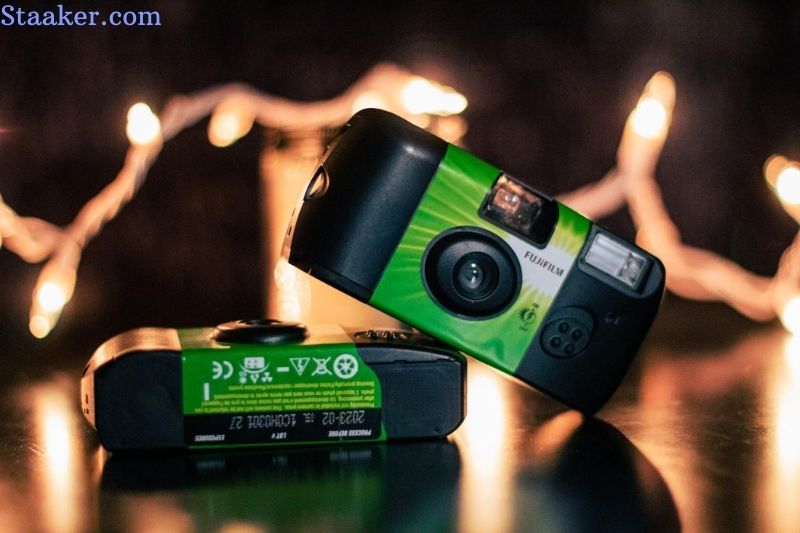 4. To take a picture, push the camera’s top button.

5. Continue to use your camera until the movie is finished.

6. Take your film to a photo facility to be developed.

How Does Disposable Camera Developing Work

To remove the film, follow the instructions outlined above. You’ll need to develop the images once the film has been rolled out.

You won’t be able to do this yourself (unless you have a complete picture development facility in your home). Taking a quick trip to the nearest Walgreens store with a photo lab is one of my favorite and most cost-effective ways to develop my film.

It’s as simple as dropping off the video and negotiating small things like photo size and budget with them.

This will bring up a list of film developers in your area who can develop the film from your disposable camera.

How to Get Disposable Camera Pictures onto a Phone

While there is no direct way to convert developed film to digital format, there are a few options for getting the images onto your phone or computer.

Using a photo scanner app on your phone is one of the simplest and highest-quality methods. Of course, the film must have already been developed, and images were taken.

You can use the scanner app to scan the developed photos. When photographing another photograph, it will erase most of the glare caused by light sources. They also aid in maintaining as close to the original colors and crispness as feasible. 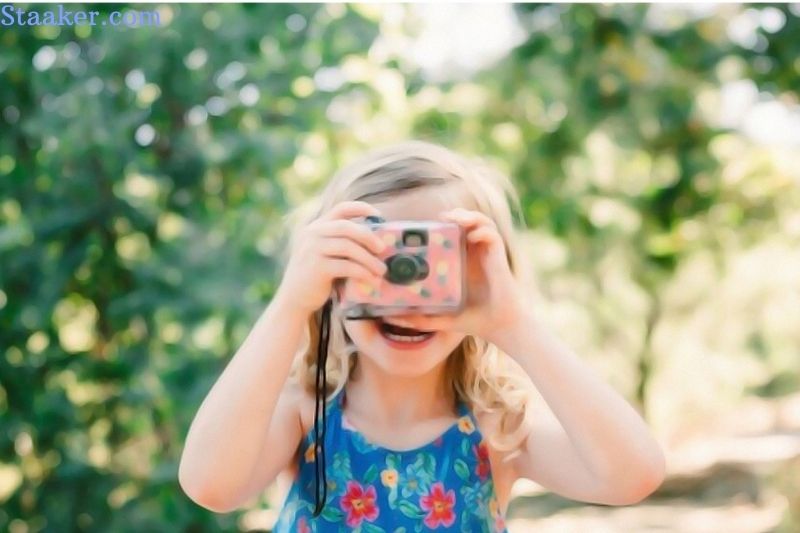 What you’ll need to accomplish is:

This should ensure that the photographs are transferred to your phone without glare or degradation.

You’ll have to manually photograph the developed photographs if you can’t utilize a scanner app for some reason.

Here’s what you should do:

Third-party photo editing tools like Lightroom Mobile or Snapseed can then be used to adjust the sharpness and colors. Both will provide fantastic outcomes and are entirely free.

While not as technologically advanced as your smartphone camera or DSLR, Disposable cameras can nonetheless capture beautiful images.

Here are some pointers on how to take great photos.

There are no strategies for improving low-light performance because these cameras work by simply opening the shutter and exposing the film to the light.

This means that for the most outstanding results, you should shoot in bright light (ideally during the day).

Most disposable cameras have a flash option, but keep in mind that they frequently overexpose the image, and there’s no going back once you’ve hit the shutter. 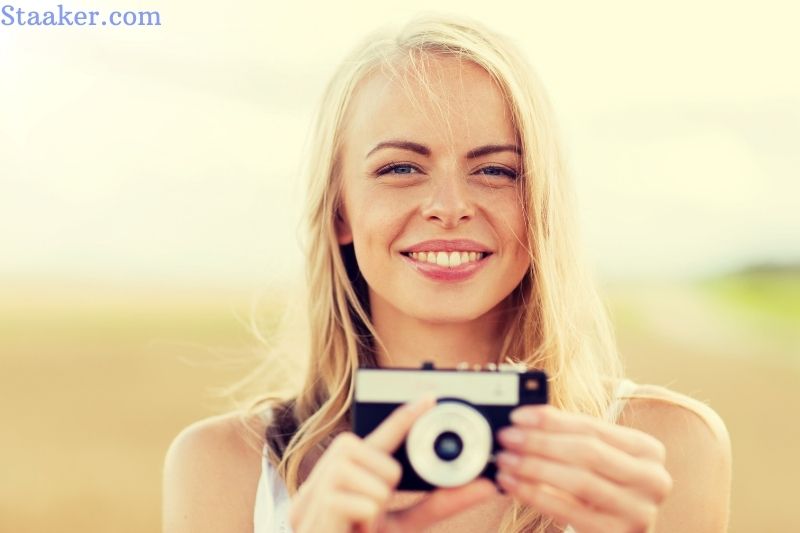 Pay attention to the composition and angles

You’ll have to get inventive if you want to get an outstanding photo with your disposable camera because the camera is your biggest constraint.

For example, learn how to arrange your photographs using the rule of thirds. Even if the overall quality of your photographs is poorer, the images will tell stories and catch people’s attention.

Avoid shooting boring photos since they will often become even more boring than life.

Can a Disposable Camera Be Reused?

Although throwaway cameras are promoted as single-use cameras if you have film and a battery, you may disassemble them and recharge them, you’ll need several items, including the following: 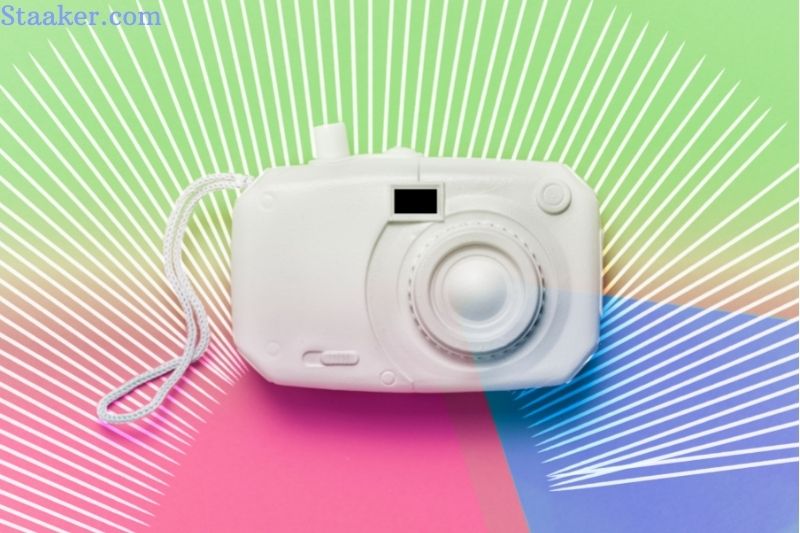 After that, use the box cutter to cut the camera open. Cut the plastic first, open the lid and move the battery cover. Remove the new film from the cassette and rewind it onto the coil. Block the wheel from above with your toothpicks. Then, close the lid and insert a screwdriver into the hole beneath the coil while holding them. It can be twisted to set it.

How Many Pictures Can You Take on a Disposable Camera?

On a disposable camera, you can take about 27 pictures depending on the brand, as some brands, such as Kodak, allow you to take 27 pictures, while some newer models will enable you to take up to 50. 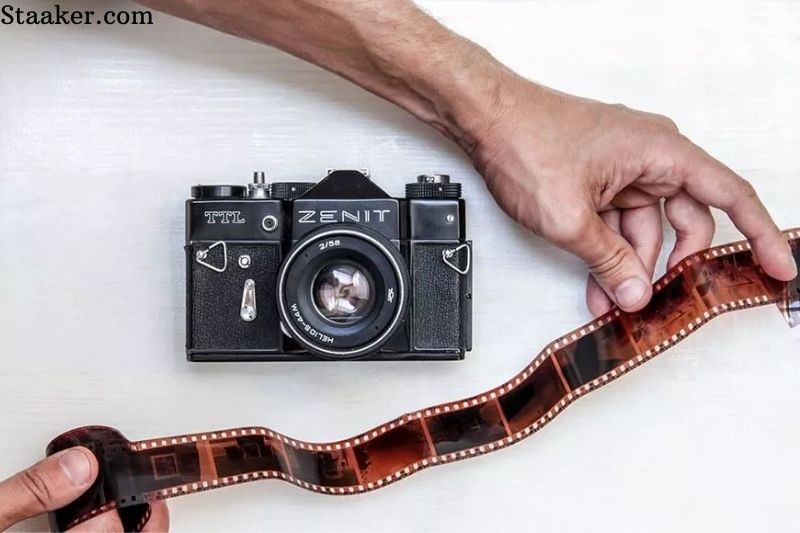 How to Print Pictures from a Disposable Camera

Another problem arises when you think of printing the pictures from the film. So, this can’t be done at home unless you purchase an expensive printer for it. So, the easiest way to print out the photos is to go to a shop and print the pictures. You can also convert the images into a digital form and save them to your phone.

Disposable cameras typically last two years, but they can live up to five or six years if stored in a cool, dry atmosphere. The film is what expires, and storing it for too long might cause it to lose quality. To get the greatest images, you should aim to use them within a few years.

Is it necessary to always use flash on a disposable camera?

Use the flash unless you’re shooting towards a reflecting surface (mirrors, water, or glass). In situations where there is a lot of contrast, exposures always come out sharp. Even in daylight, turn on the flash for the most significant effects.

Is a disposable camera from Kodak or Fujifilm better?

The Fujifilm is the superior camera of the two. Color and sharpness are the first two things you’ll notice. Kodak falls short in both categories. There’s haziness and blur to it. 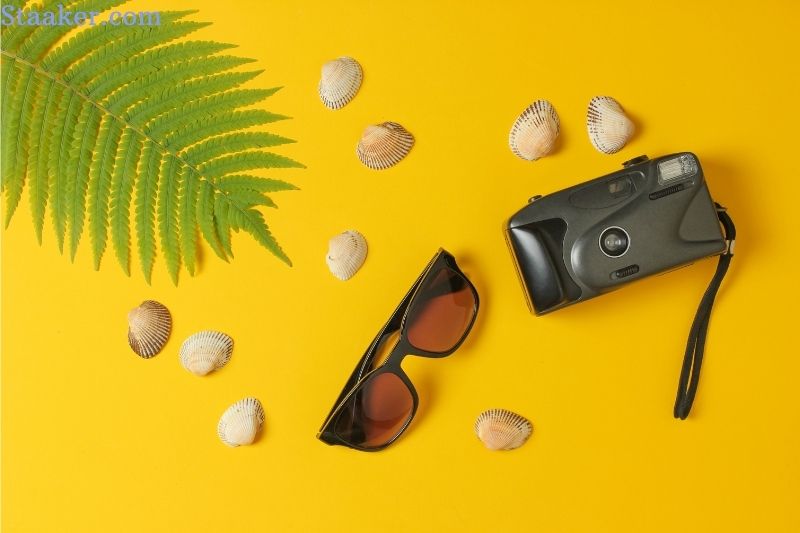 Why are my disposable photographs so hazy?

Because the shutter speed of disposable cameras is relatively slow, fuzzy photographs occur. The length of time the camera shutter is open, exposing the image to the camera sensor and film, is called shutter speed.

When is a disposable camera no longer usable?

To take a picture, press the button on your disposable camera. Stay as still as possible and hold the camera as steadily as possible. A click indicates that the shutter has completed its opening and closing cycle. It suggests that a photograph of you has been taken.

How many photos does a Kodak disposable camera take?

How many pictures does a Fujifilm camera take?

Whether a beginner or an experienced photographer, a disposable camera can be a fun and affordable way to try out new techniques and explore your creativity.

Remember to use caution when using film cameras and keep your prints safe and dry for long-term storage. So get out there and shoot some photos!