Drones have become a widely-used tool in agriculture and photography thanks to their outstanding technological advancements. Farmers are increasingly using drones to improve their farming operations.

While drones have many benefits for the agriculture industry, it is important to remember that there are also some disadvantages of drones that farmers should know.

This article will provide a better understanding of the Pros and Cons of Drones in Agriculture. Let’s get going!

How are drone used in agriculture?

Drones can fly long distances and over large areas quickly, making them ideal for data collection in farms. Drone-based surveys, whether using standard cameras or more sophisticated sensors, can help farmers inspect and gather data about their crops in a fraction of the time it would take to use more traditional methods.

Most drone-based farm management apps use multispectral sensors. Multispectral sensors can see images beyond the visible spectrum, as their name suggests. It can also capture images of electromagnetic energy which the human eye cannot see.

Near-infrared (or near-IR) is the most common frequency band for crop management. Sensors sensitive to different frequencies are used because different surfaces absorb and reflect different energy bands. Healthy plants that are rich in chlorophyll pigment absorb more visible light. 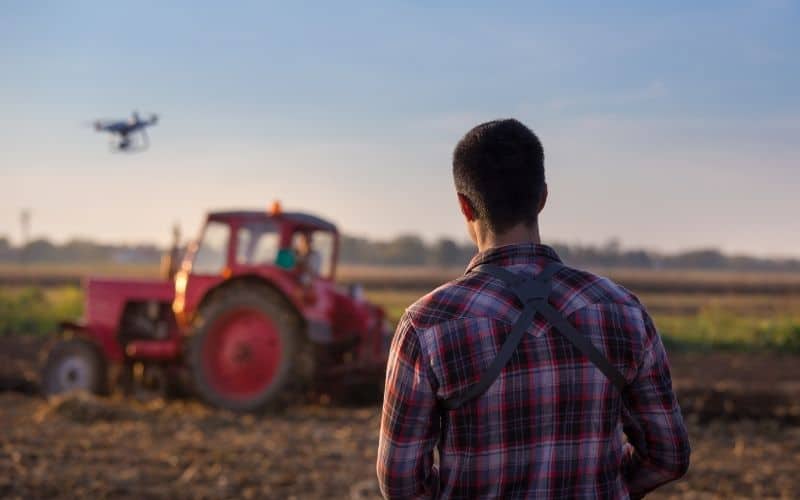 These healthy plants, on the other hand, absorb less near-IR energy. Healthy plants and bare soil exhibit the opposite behavior. They absorb a greater amount of near-IR energy but absorb a smaller portion of visible light. Multispectral sensors can capture reflected energy, which is energy that is not absorbed.

Multispectral sensors allow drones to capture aerial images showing the contrast between near-IR energy in different farm areas. These images summarize farm health and let the farmer know which crops need more water or what pesticides or fertilizers to be applied. This information allows the farmer to better allocate resources according to the crop or area that is most in need.

Multispectral sensors that are more sophisticated can now capture more discrete energy bands, such as thermal infrared and red-edge. These advanced multispectral sensors are capable of identifying unhealthy crops and areas that lack water. They can also provide data to farmers to help them determine the best time to harvest their produce.

The benefits of drone in agriculture

Drones can be used in agriculture easily. Drones are easier to deploy than other aircraft. Drones can be controlled easily using the buttons and icons on the mobile phone. Maqui berry farmers can use a manual to help them work with Drones. One example is to press the release icon to send the Drones on their journey.

Multispectral drone surveys have opened up a new world of data quality and accuracy that surpasses what manual surveys can provide. Multispectral sensors are capable of capturing energy bands beyond what the naked eye can detect.

Multispectral surveys with drones are unique in that they can hover at lower altitudes. Multispectral imaging was previously done onboard manned aircraft. Satellite images can also be used to analyze visual aberrations within a single farm. The data is less detailed at higher altitudes than those captured by these methods.

Some drones can scan crops with visible or near-infrared light. The drone’s onboard light processing device can then identify the amount of near-infrared and green light reflected by plants. These data are used to create multi-spectral images that depict plant health. These images can be used for monitoring crop health and to monitor the treatment of any illness.

Regular use of drone in agriculture can reduce labor costs. Drones improve the quality of crops before they reach their target markets. Regularly, the drone detects any pests on crops. UAVs can be used as an alternative to human labor on the farmlands. They are used to monitor the farmlands visually.

Drones are cost-effective alternatives to quality detectors. This is done to stop rejected crops from reaching their target markets. This will help offset the cost of buying Drones. Farmers might even be able to avoid losses due to diseases or infestations on their plants. 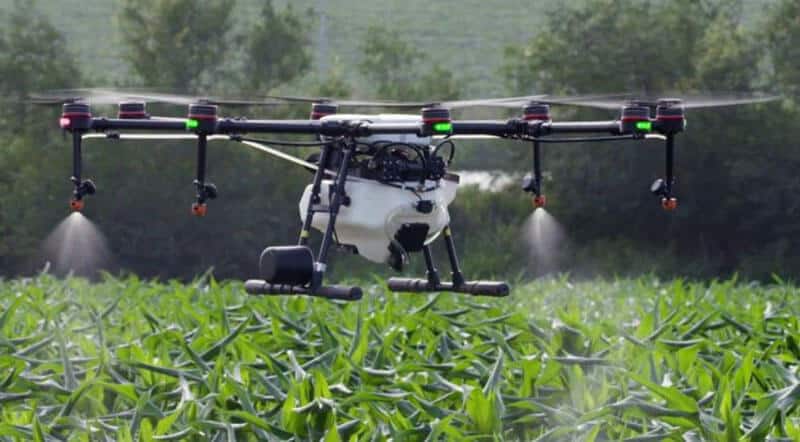 While the technology isn’t very common, drones can be used for the chemical treatment of crops. The drone can carry liquid fertilizers and pesticides as a payload. The drone operator can then create a flight path that the drone will follow to spray the treatment. A few models have an algorithm that adjusts the spray rate based on the drone’s altitude. This ensures that all crops get the same treatment.

This classification includes the DJI Agras MG-1, which is the most commonly used drone. It can hold a maximum weight of 10 kg. It can carry a payload of 10 kg and spray the payload on 7-10 acres in one battery cycle. The DJI Agras is a preview of the future of agricultural drones. Drones will be able to do much more than gather data.

Most farmlands are exposed to extreme dryness or wetness naturally. Many farms are wetter or drier than other farmlands. Drones can detect areas in which farms are suffering from dry or wet conditions.

Farmers can save a lot of crops with drones. The drone roams the fertile fields to look for any signs of danger to the crop. Drones monitor the areas impacted by transmission farmers to ensure this.

Farming is labor-intensive. Maqui berry farmers who are exposed to harsh weather will need drones to replace them. When mapping their farmlands, farmers often feel exhausted. Drones allow farmers to survey land easily and measure its area. Drones can improve the mapping of farmlands.

The drone provides high-quality images that allow for the monitoring of farm conditions. Topography changes, the existence of a new structure, or weather disturbance are all good examples. The Drones can be flown over a farm to take photos or spray fertilizers if they are optimized. Drones are revolutionizing agriculture and can make farming easy by mapping out the entire area.

To satisfy buyers, it is crucial to improve crop quality. Drones help farmers improve the quality of their croplands. Drones can be equipped with light processing equipment to view the crops. This device gives farmers information about their crop’s health. To prevent the shipment of substandard products, the product can detect unhealthy seeds.

This device measures the quality of harvested crops after they have been treated with pesticides or other medicines. This is done to monitor the effects of the substance on crops. Farmers discard Insecticide-treated crops.

Check out our best drone for Agriculture here.

The drawbacks of drones in agriculture

The National Aviation Administration (FAA) regulates Drones usage in commercial and private areas. The FAA must authorize all Drones between 0.25 kg and 55kg. Drones with a weight greater than 55 kg are subject to higher restrictions by the regulating companies.

These Drones are not allowed to be used beyond the line of sight or under a covered structure. Drone users should not fly the Drones above people who are not part of their operation. Drones shouldn’t travel at speeds of more than 160 km/h and an elevation significantly lower than 120 meters.

Farmers need to invest a lot to get agricultural drone technology widely adopted. This is the biggest obstacle to widespread adoption. A standalone drone like the fixed-wing senseFly eBee agricultural drone can run more than $10,000.

Popular DJI drones such as the Phantom 4 Pro can be purchased for between $1500 and $2000, but they are not yet ready for use in agricultural surveys. An additional $1500 will be required to upgrade the multispectral sensor on DJI drones. Many farmers find it difficult to take advantage of the growing popularity of drones for agriculture.

There have been positive developments in this field. Some countries have provided subsidies for drone technology to help the agricultural sector. These initiatives should open the doors to the wider adoption of drone technology in agriculture.

Drones are still fragile and light, despite all the sophistication of modern technology. Strong winds can easily knock them out. Your drone’s motors and electrical components are not waterproof, so being caught in heavy rain can be fatal. Unfavorable weather conditions can cause signal loss, causing even the transmission technology connecting the drone to its remote controller to fail.

A series of successful drone surveys will only be possible if the weather is perfect. Farmers may not always have the best weather conditions, especially in some areas of the country.

The FAA requires a spotter to make sure that Drones are visible from the ground. Drones visible to the naked eye are not allowed by farmers. The FAA’s terms and conditions are violated if the Drones disappear.

Read more about the way to register a drone here

Drone technology is still struggling with limitations in flight range and flight time. The drone’s battery life and motor efficiency limit flight time. Transmission technology and signal interference can affect the range of the drone.

The typical flight time of rotary-type drones is between 15 and 25 minutes. After that, they must return home to get their batteries replaced. This is where fixed-wing drones do better. They can fly for as much as 40 minutes with a single battery. To complete an aerial survey, drones will need to be charged 2 to 3 times.

The drone operator will have to spend many hours monitoring and controlling the drone. This could include moving from one takeoff point to the next.

Drones could cause privacy concerns for farmers. Drones could expose their land to the public, they fear. Drones’ internet connection is the main reason. People assume they are being watched when they see Drones at the top of the screen. Others report issues they see when Drones are present because they feel threatened.

Even though the FAA has guidelines that must be followed to protect residents’ privacy, there are still people who invade others’ personal spaces. Anyone who sees Drones flying above their property feels uncomfortable.

Read also: Top Cool Things You Can Do With a Drone

FAQs regarding Drones in Agriculture 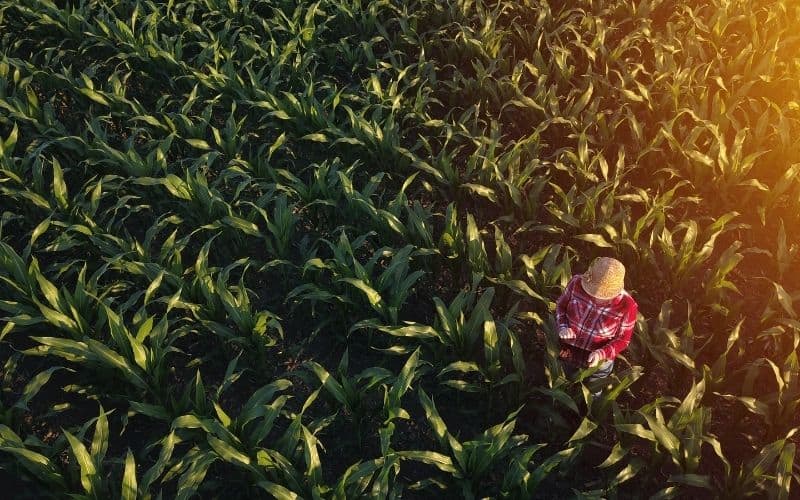 How long have drones been used in agriculture?

Thurling’s 1985 research is the first to show that a drone camera can be used. He used it to take vertical photos of weeds in oilseed crops during his research. Yamaha presented the R-50 two years later. It is the first UAV (Unmanned Aerial Vehicle) that was used for dusting crops.

What type of drones can be used in agriculture?

What kind of drones are used in agriculture?

Drones are now used primarily for military purposes. Drones are used as target decoys for combat missions, research, development, and supervision and have been an integral part of military forces worldwide.

Drones can gather high-quality, accurate data about crop health. This allows farmers to make better decisions that will lead to higher yields and greater profits.

Remote control of fertilizer or insecticide spraying can be made possible by more innovative models. The initial costs of purchasing drones for agricultural purposes and the technical skills required to use them successfully can be quite overwhelming.

Hopefully, through this guide of advantages and disadvantages of drones in Agriculture, farmers will make a suitable decision for themselves. Thank you for taking the time to visit staaker.com.